Selling Your Soul as a Freelance Writer


It’s shameful how many publications and editors are willing to take advantage of freelance writers. After all, those editors know writers need the work in order to earn income.

What annoys the CRAP out of me are those shameful editors who pretend to publish “reputable” publications, but then demand payment from businesses who want their story to feature in that particular publication.

Let me draw you a picture.

Let’s assume there’s an online publication out there known as News-stuff Monthly and the editor (and conveniently, also the owner) of that publication is called Jane.

But let’s take the example another level further. Let’s now assume that Jane ALSO owns a marketing company outside of her online publication.

Jane’s marketing company charges clients who want to circulate their news or press releases to the world. She charges a handsome fee for her services. She ALSO charges those same clients a fee for having a freelance writer create a news-worthy ‘article’ that will be published in her online publication.

At first glance, it doesn’t seem as though there’s anything wrong with this business model.

What you might not realize is that the poor shmuck freelance writer doing the work of promoting businesses who are paying for the marketing are being ripped off. 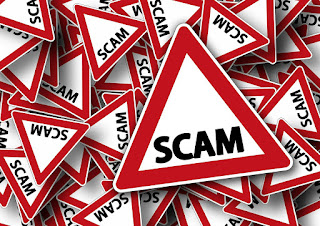 Let’s look a little closer at this particular business model – and how much it stinks.

Fictional editor and publication owner, Jane, receives a press release from a paying client through her marketing company. She pays her pet freelance writer $30 to write an article about that press release to be published in her ‘reputable’ online publication. She sends an email to the poor shmuck writer, outlining the company and story she wants written and issues a deadline of a few hours away, because it simply needs to be published RIGHT NOW.

(Um…. $30? For a 600 word article WITH quotes from company execs and research on the company and  a news-worthy story being written? I won’t start a rant about the outrageously low pay for such work. But I digress. Let’s get back to the fictional story.)

So the shmuck writer isn’t given the opportunity to say his or her schedule is already booked with other work. The shmuck writer doesn’t get an option to extend deadline or explain that other, more regular, higher paying clients have standing orders in place that need to be written first.

The megalomaniac editor, Jane, doesn’t want to hear that.  The response is to write it NOW, or don’t write for that publication again.

So that silly, gullible writer is told to interview the company CEO and get some exclusive quotes to be published in the online publication NOW. Then that low-paid writer is expected to create a wildly wonderful, newsworthy article that will be published in just a few hours and that story is fully expected to go viral all over social media.

Oh yeah, did I mention that the writer is also expected to promote the piece written on all of his or her own social media profiles to increase circulation?

The writer stays up for 8 hours researching the piece, working out pertinent questions to ask the company execs, collecting quotes from the CEO, fitting them into the story, ensuring research is correct and completed, foregoing sleep and family, and ignoring personal needs.

AND THEN the fictional editor, Jane, decides the article that was written is so great, she publishes it in HER OWN NAME, so the poor shmuck freelance writer doesn’t even get the benefit of a byline for those efforts.

I’m beyond disgusted with this story right now.

Matthew Hays, a Montreal-based author and journalist wrote about a particular ‘writer’ who took press releases received from clients, rewrote them, and then posted them on one of the world’s most popular publications (yes, I'll say it - it was for Huffington Post). His comment about that kind of behavior was:

“This is the exact opposite of what reliable journalism is supposed to be: It’s not about clients paying for advertising, but fair and reasonable assessments of what is going on around us.”

Let’s assume that the fictional editor, Jane, and her fictional publication News-stuff Monthly also allows her pet freelance writers their own email addresses from the publication address (for example,. dumb-writer@news-stuff-monthly.com).

No matter what those poor freelance writers send out as questions to CEOs of Fortune 500 companies or marketing execs of globally-recognized brands, the editor goes into the account and edits the content being sent by that writer.

For example, let’s say the writer has posed some questions of a company exec and sent them out. The editor then logs into the writer’s account and asks a few more questions that are redundant in terms of the article being written.

But she does it AND THEN SIGNS OFF AS THE FREELANCE WRITER.

Not only is this extremely unprofessional, but it’s also highly unethical - and likely illegal.

Seriously. It’s ridiculous the lengths some freelance writers will go to just to try and ‘break into’ new markets.

This little ‘fictional’ story is actually happening to a friend of mine RIGHT NOW. He’s a qualified journalist with a long history of writing for some of the world’s most prestigious publications. And he got duped into working with a dodgy publication with an amateur ‘editor’ with a God complex just to get his name into an international market.

And the silly writer won’t stop. Apparently, he thinks he’s getting valuable ‘exposure’ for all those efforts and that below-minimum-wage payment.

Personally, I think he’d be better off flipping burgers and Micky D’s if he wants to earn that kind of bullshit money.

My advice – steer clear from any publication that doesn’t pay PROPERLY for your time and effort.

And completely avoid those editors who only want to use you for what they can get without paying you properly for the privilege of your time and effort.

But not all publishers are same as you mentioned some of them also gives the opportunities to writers to show their potential. By the way your blog was good and I loved it keep posting in future. If anyone looking for Professional Content Writing Services provider can visit us. If you want to read about content writing you can also do that.

I just want to thank you for sharing your information and your site or blog this is simple but nice Information I’ve ever seen i like it i learn something today.

Thanks for posting this blog. Keep posting these types of blogs.

I just want to thank you for sharing your information and your site or blog this is simple but nice Information I’ve ever seen i like it i learn something today.

Thanks for sharing your thoughts. Everyone should read this at once. write for us

The beauty of the German Castles has always been immortalized in the Disney World which remains etched in our mind distinctly. Most Beautiful Castles in Germany

Saying Thank You for Birthday Wishes is important. When the well wishes all come in on your birthday; you need to have the right words. We TQ Wishes can help.

PR Bulls is a content publishing platform started by a team of two individuals with an aim to inspire the world by creating world-class content. Our platform combined with the power of social media is set to showcase your stories.
Content Marketing Company

It was a great way to convey freelance writing income in the way of beautiful storytelling.
Here it is! Most of the Freelance content writer get stuck thinking their income while working from home.
If you are finding an opportunity as Content writer freelancer then Register yourself on WomenFreelancer

It was a great way to convey freelance writing income in the way of beautiful storytelling.
Here it is! Most of the Freelance content writer get stuck thinking their income while working from home.
If you are finding an opportunity as Content writer freelancer then Register yourself on WomenFreelancer

Thanks for sharing the blog, seems to be interesting and informative too.
write for us

Hello, Thank you for Sharing such nice Blog. At State Services, the team understands the importance of well-written content. Committed to render high-quality services backed by impeccable linguistic skills and technical ideas, it offers best Content Writing Services in Delhi.

Get Your Cartoons Published and Earn $$$

Want to email me a question? Want to see a particular freelance writing site reviewed? Send me an email!

Bianca Raven
I'm a freelance writer. I'll write about anything that comes into my head. The best part about it is that I get to work from home everyday! What could be better? My freelance writing business is broken into parts that work for me around what I want to do. This means I write for magazines and newspapers as well as writing for online sources. Feel free to join me on Facebook (http://www.facebook.com/bianca.raven.98) or on Twitter (http://twitter.com/BiancaRaven)